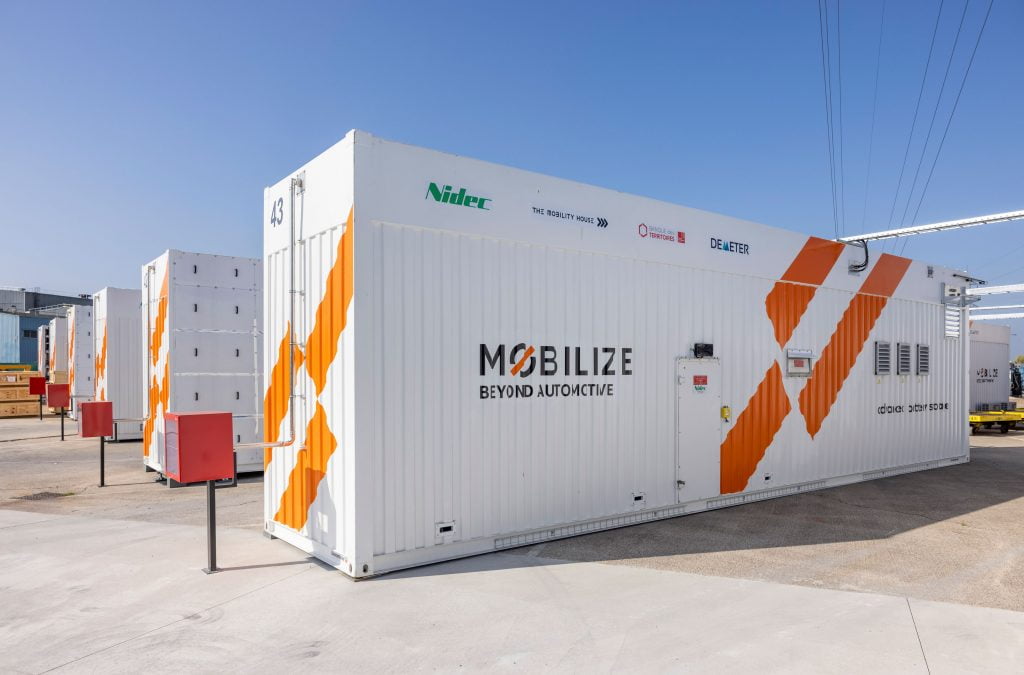 Car batteries are being given a second life thanks to a large multimillion-dollar European project, a worldwide best in class in renewable energy use and storage.

Milan, 15 September 2021 – Through its new brand, Mobilize, Renault Group was one of the first car manufacturers to take steps towards finding ways in which electric vehicle batteries could be reused. For over a year it has been collaborating with Nidec ASI, head of the Nidec Industrial Solutions platform belonging to the Nidec Group, one of the groups engaged in restarting the economy with a view to greater sustainability, on the development of an important pilot project in the stationary energy storage sector. The idea behind the partnership was to take car batteries and use them in renewable energy storage systems (BESS – Battery Energy Storage System). The two demonstration sites in France, which use batteries from electric vehicles (Renault ZOE) housed in containers, are proof of the initiative’s success.

The project undertaken by Mobilize and Nidec ASI is of great importance and demonstrates how it is possible to promote a circular and sustainable development model in the automotive sector in a way which also responds to fears over what happens to batteries at the end of their service life. The electric vehicle market is continuing to grow rapidly, with Renault Group playing a major role, in particular with its ZOE car, almost 100,000 models of which were sold in Europe in 2020. With the growth of electric mobility, thought has also been given to new applications for vehicle batteries which, at the end of their “automotive” life, still retain at least 80% of their capacity. One example is stationary energy storage, on which the Mobilize project in collaboration with Nidec ASI has been focusing.

This far from trivial challenge that the two Groups have had to tackle is linked to using batteries in energy storage systems that are very different from new ones which all come from the same production batch and are identical to one another. In fact, when following the path of re-purposing, not all batteries reach the end of their service life in the same state, because the conditions of each battery change depend on how they have been used.

Nidec ASI’s role, working in close synergy with Mobilize as a partner for the integration and supply of storage solutions, involved measuring the state and depth of discharge of each battery in real time and managing the flow of energy inside the batteries in a uniform way, avoiding overheating and guaranteeing maximum safety of the system, grid stability and the availability of electricity throughout the day. The system can in fact manage the differences between electricity consumption and production at any given time, recharging the batteries when demand is low and subsequently returning the electricity stored in the batteries to the grid as soon as demand increases, thus increasing the share of renewables in the energy mix.

In particular, Nidec ASI France developed the “brain” of this system, in other words the control algorithms, the system integration aspects and the power management system that made it possible to implement, manage and optimize the BESS by connecting all the batteries to one another and to the system, ensuring correct operation. Nidec ASI’s Italian plant in Montebello, on the other hand, worked on the “heart” of the system, providing the power conversion system, i.e. the inverters that make it possible to modulate the electricity and ensure the right amount flows to the batteries and to the grid. One of the keys to the success of projects such as this lies in the “dialog” between the power management system and the power conversion system and the ability to make them work together effectively.

“We are very pleased with the results achieved with Mobilize; they have taken our understanding of the challenges involved in re-purposing car batteries to a new level, thanks to the development of algorithms and the union between the best Italian and French technologies. A project that proves that giving a second life to car batteries is possible, and places Europe ahead of the world in the research on renewable energy and the circular economy. We are proud that Mobilize chose us as a partner in this initiative, confirming our French plant in Roche-La-Molière and our Italian plant in Montebello as centers of excellence respectively in the development of power management systems and power conversion systems. We consider the success of this collaboration an important new step in promoting a sustainable development model, based on the re-purposing of key components such as vehicle batteries and on an ever-increasing use of renewable energy“, said Dominique Llonch, CEO of Nidec ASI and Chairman of Nidec Industrial Solutions.

Research & Development of the project has been completed successfully, and the first systems have been installed in Renault’s Douai and Flins plants, two sites which demonstrate the technology used in France. The two systems, designed to make battery removal and insertion easy, have a total installed capacity of 4.7 MWh and 15 MWh respectively and while the first is already providing services for the French energy grid, the second will be operational by end of the year. The goal is to extend the life of the installed batteries by 10 years, using them to provide cleaner and cheaper energy for various local applications.