Onboard energy storage system for an all-electric ferry – Case study 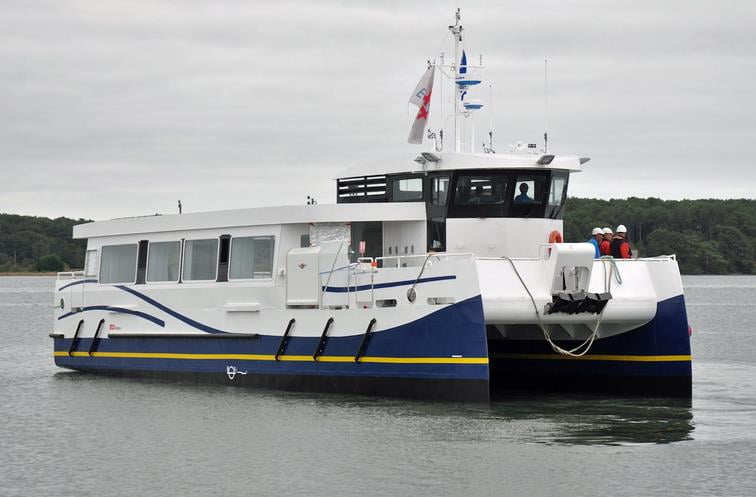 To design and supply an electric propulsion system for an all-electric, zero-emission passenger ferry

A French community in need of a commuter ferry set a high bar when defining the requirements for its design. Leaders wanted a silent-running, environmentally friendly, all-electric vessel that could quickly and frequently shuttle passengers back and forth across its harbor. To power the 147-passenger vessel, they sought a battery-free energy storage solution that could be housed compactly in the hull of the vessel.

Nidec Industrial Solutions was selected to supply the innovative electric propulsion system for what would become the first electric boat in the world to operate without a battery.

Instead of drawing on energy stored in onboard batteries, Nidec’s system relies on 128 high-capacity supercapacitors that are distributed throughout the two hulls of the catamaran. Traditional battery recharging systems can take a half hour or more to recharge, which can place severe limitations on the number of trips a ferry can make in a day. The supercapacitors supplied by Nidec make it possible to recharge the system in just four minutes – approximately the same amount of time it takes passengers to enter and leave the boat.

Carrying only the energy it needs for each round trip, the ferry – equipped with two electrical azimuth thrusters — travels at a maximum speed of 10 knots. At that rate, it takes seven minutes for the ferry to travel from one side of the harbor to the other, enabling the ferry to complete 28 roundtrips a day.

With 28 recharges per day, the boat will be recharged about 7,000 times a year – far more than 500 to 1,000 recharge cycles that traditional lithium-ion batteries and Ni-MH batteries can support. The 15- to 20-year expected life of the supercapacitors is also considerably longer than traditional batteries

This non-polluting electric ferry emits no carbon dioxide and other greenhouse gases. Given the system’s quiet operation, noise and vibration in the cabin and outside environment are also minimized.